I’m sure you have not missed out on the fact that 2007 is an alleged classic in the Rhône valley, in particular in the southern Rhône, and particularly particular in Châteauneuf!

I have had the opportunity to buy a number of cases of this particular vintage. I travelled to the area when on vacation in Provence in June and paid a visit to Domaine de la Mordorée and Domaine Grand Veneur. DGV is a good producer, but Mordorée is just outstanding. 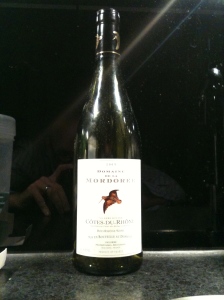 We tried out much of their range, and of course their CNdP is great, but do not miss out on their Lirac either, or the Rosé for that matter! According to Parker, everything labelled Cuvée de la Reine des Bois is a must-buy, and it’s easy to agree with that assessment. Their 2007 CNdP CdlRdB is rather steep at €45 but it is still a good buy.

I managed to get my hands on 24 bottles of their 2009 Côtes du Rhône La Dame Rousse which is one of the best CdR I’ve had. It easily deserves its 90p. This is just €10. A bargain. Very decent house wine. It is sold out at the producer. Should you find it in a store, do not hesitate to buy it. It’d still be a good buy for €15 in my opinion.

A producer I did not visit but nevertheless had a chance to buy a case of CNdP from is Les Cailloux. A bought a case of the 2007 and the 2008, respectively.

I drank a first bottle without airing. Everything was there: structure, attack, fruit and power. Still, the nose was rather one-track and showed almost only black current notes. I missed out on the meat and stable sensation. It was hard on the alcohol and still a bit too fruity. I’ve experienced this in other 2007s as well. I have to say, though having a limited experience on 2007, even though it is a great vintage and most experts consider it drinkable now, the wines appear to need decanting for at least a couple of hours to reach balance and smoothness. Or even better: store for another two years. This wine has the potential of a champion. 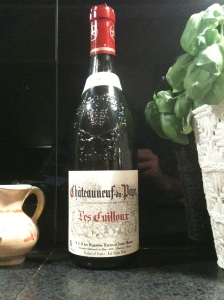 I tried it a month later and…Now we’re talking. I did not repeat my mistake from the last time and this time aired it for 2-3 hours before drinking. Everything now seems to be in harmony. Blackberries, licorice, tobacco and game on the nose. A fantastically complex CNdP. It kept changing from one sip to another (and I wasn’t drunk….). Very balanced and looooong. This is an exquisite wine, and the price is really ridiculously low. Bought a case for 28€/bottle. Also bought case of the 2008 for 23€/bottle. I haven’t tried the 08 but simply do not expect it to be up to this standard. A great, great wine where all of the components appear to be in place. 93p.

This entry was posted on Wednesday, November 24th, 2010 at 10:01 pm and posted in France. You can follow any responses to this entry through the RSS 2.0 feed.
« Vertical tasting: Châteauneuf-du-Pape
Tim Hardin »